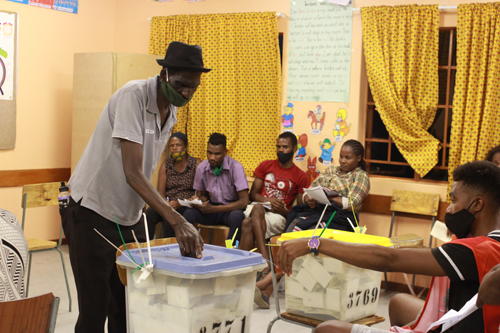 Voters in the southern part of the country will return to the polls next week Friday for a rerun, ordered by the country’s electoral court, which annulled last year’s local authority elections in Stampriet, Aroab, Koës, and the Mariental Rural constituency results due to irregularities.
The country’s electoral commission wrote to political parties on Thursday that fresh elections will be held on 26 February. The commission said a meeting will be held today with stakeholders to discuss logistical preparation for the said election.

Three judges of the Electoral Court last year ordered a rerun of elections should take place at Koës, Aroab, Stampriet local authorities, as well as the Mariental Rural constituency after irregularities were picked up there.

The Electoral Commission of Namibia (ECN) brought an application in the Windhoek High Court to have the ballots cast and the elections held on 25 November declared null and void after they picked up that some polling stations closed early, and the wrong ballot papers were issued at others.

Windhoek High Court Judges Shafimana Ueitele, Herman Oosthuizen and Orben Sibeya found that the irregularities were indeed material enough to have an impact on the outcome of the elections.

The ECN will now have to hold fresh elections at the localities within 14 days from the date of the order, which was Friday. This means elections will have to be held on or before Christmas Day.

The irregularities that occurred included the polling station at Glencoin in the Hardap district closing four hours earlier, as well as incorrect ballot papers used at Koës and Stampriet local authorities.
The ECN also brought another unopposed urgent application to correct the allocations of seats in respect of the Otavi, Okakarara and Katima Mulilo local authorities.