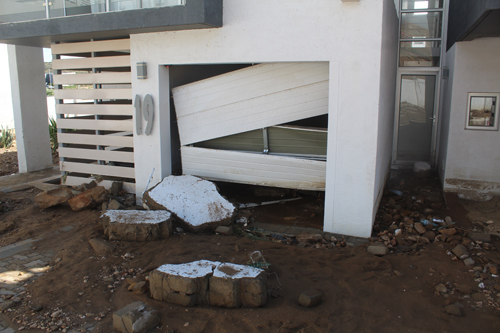 The Namibian Society of Engineers (Nase) has blamed contractors who built a luxury estate in Windhoek’s leafy suburb of Kleine Kuppe for a flood of water that damaged the property during a heavy downpour of rain this week.
Shoddy workmanship and sub-standard architectural work, according to Nase, contributed to the mayhem that engulfed homes in the state-of-the-art Ambrosse Village, which houses 154 units.
When New Era arrived at the cordoned off estate yesterday, where a single unit costs about N$1.7 million, huge piles of debris were still visible as owners tried to clean up the mess.
Although a number of homes are accommodated in the estate, only a section of units, the boundary wall and electric power cables were damaged.

Nase president Charles Mukwaso said the mayhem is clearly due to an architectural problem.
He said architects and engineers were supposed to advise and guide the contractors on site.
“The person who puts up an infrastructure relies on the architects, who are professionals. The City of Windhoek should not have approved it. Our local authorities use mismatched skills. Some don’t have engineers, so they can’t approve plans,” he reacted yesterday.
Mukwaso said there are hundreds of qualified unemployed engineers roaming the streets, who could do the job.
According to the available 2017 statistics, Mukwaso revealed there were about 200 engineers without jobs. He added they will do another survey to get the latest figure.
“Developers don’t have money to recruit qualified engineers; hence, they take any chance taker to do sloppy work.”
He urged local authorities to start being serious with people’s livelihoods.
He said departments that deal with building plans need to be capacitated with qualified engineers, adding: “It is absolutely risky in terms of public safety and damages to property.”
City spokesperson Harold Akwenye said the council went to assess the situation and is expecting a full report on the matter.
“We have a team on the site that is busy investigating the situation to determine what went wrong and the causes of flood. We are expecting a report to make an informed decision,” said Akwenye.
Developers of the estate yesterday advised tenants to prepare for the worst, as more flash floods are expected.
Most of the affected tenants are still on holiday; therefore, the extent of damage could not be assessed yet.
The developers said they have made plans to assist the affected families in terms of evacuation and other humanitarian aid.
However, some tenants expressed concern as to who will compensate for their damages.
“I just found out that my insurance for the property does not cover natural disasters. What am I going to do? Who is going to compensate for the damages? I don’t have much to say; I will wait to hear from the developers,” anonymously bemoaned a single mother of two.
Another tenant, Anita Neethling, who lives alone, said she is lucky because the clause of natural disasters is covered in her insurance.
Neethling also gave a recollection of the heavy downpour that resulted in her home being flooded.
“It started raining around 16h30 but I wasn’t worried at the time. I was upstairs in my room and I didn’t notice anything happening until the power went off,” she narrated.
“As the power went off, the sliding doors were opened, and I saw a neighbour running out of the house and I asked if she was fine before she started shouting ‘my house is flooding’. I came out on the balcony and saw water coming down. I realised we were in trouble.”
Neethling said although her belongings are covered by her insurance, she could not give the exact indication of damages incurred in monetary terms.
“The mudslide is the biggest problem. My car is stuck. I can’t take it out, but it is not damaged. I have to replace all couches and other furniture. Everything that was standing on the floor ground should be replaced. Another affected tenant said he was in his room when the storm hit.
“I was in my room at around 16h00. We heard the helper screaming downstairs. We came down and saw everything was covered in water. It was pouring heavy and water was forcing to pass. It came from all angles. We were scared. I thought it was going to rise higher,” said the tenant under anonymity.