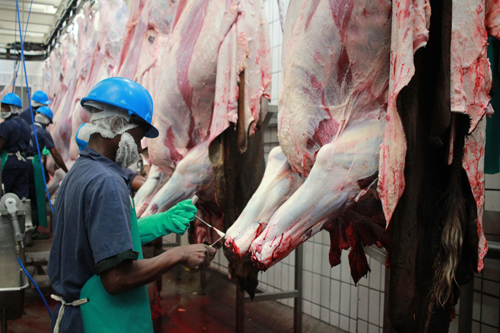 OSHAKATI – The possibility of farmers in the Northern Communal Areas (NCAs) to export meat to foreign markets were dashed by the foot-and-mouth disease (FMD) outbreak in January this year.
Agriculture minister Calle Schlettwein said it is a prerequisite for the area to be disease-free for a number of years before the farmers can be permitted to export the products to foreign markets.

“For now, it is not possible; the outbreak pushed the deadline further into the future,” said Schlettwein.
The minister was speaking at a meeting with the political leadership, traditional authorities and the farmers union on Friday at Oshakati.
In the meantime, the minister urged farmers to improve their farming practices to ensure that chances of an outbreak are minimal, as it has a direct impact on livestock products.

“We are now trying to fast-track the commodity best trades – but even then, if a disease outbreak happens, the restriction or the conditions for that trade is not possible,” said Schlettwein.
The minister, however, stressed that livestock production is still at the core of the regional economy, citing that once the production value chain is interrupted by restrictions, it has a further direct impact on the vendor’s retailers and the consumers.

Schlettwein said, at present, the meat value chain that was supplied by the local farmers have now been replaced by the farmers in the south.
“Because you cannot sell, the south is now taking your place in the market. You can only claim your market back once the disease has been contained,” said Schlettwein.

At present, 70% of the meat produced is currently exported.
Meanwhile, the ministry has secured N$1.7 million vaccination to vaccinate at least 800 000 herds of cattle in the NCAs.
The total cost to roll out the programme is N$97 million.

The target at the moment is at least 500 000 of cattle in areas where the disease was not previously present.
The NCAs is currently under quarantine until 6 March 2021 if there are no further cases detected within the same area.
- nashipala@nepc.com.na