Home / Gatherings must not exceed 2 hours

Gatherings must not exceed 2 hours 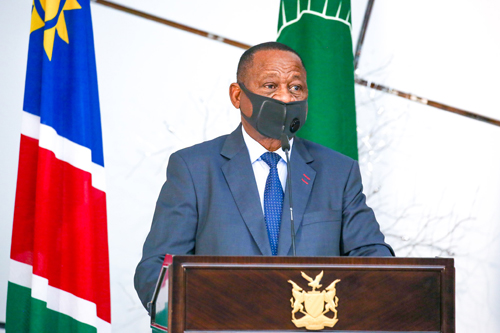 Despite maintaining public gatherings at a maximum of 50 people, government yesterday announced that such meetings should only take place within two hours to help curb the spread of Covid-19 in the country.

This and other response measures announced by health minister Dr Kalumbi Shangula are affectively valid until 3 February this year.
According to Shangula, public gatherings must not exceed two hours and should be concluded before 20h00.
A nationwide restriction of movement has been maintained from 21h00 to 04h00.

Shangula emphasised a curfew remains an important tool in limiting human interactions, thereby limiting transmission.
Shangula also emphasised registers should be maintained during all public gatherings, while attendees are encouraged to maintain a distance of not less than two metres between them.

Sale of alcohol is only permitted between 09h00-20h00 from Mondays to Saturdays. No alcohol will be sold on Sunday and public holidays.
“Both the service providers and the clients must wear masks, sanitise, and maintain the prescribed distance between them. All indoors and outdoor dining tables at restaurants, cafes and kapana places must be positioned in such a manner that they are separated by a distance of not less than two metres,” he directed.

Passengers in public transportation vehicles, including taxis and buses, are allowed maximum carrying capacity.
Shangula advised operators to plan trips in such a way that public transport arrives at the destination before 21h00.
Equally, he said, all non-urgent medical procedures shall be postponed.

Visitations to hospitalised patients are limited to not more than two close relatives per visit and limited to not more than ten minutes per visit.
All sports activities are allowed in the coming weeks, but with no spectators, while the number of those in attendance should not exceed 50.
All non-Namibian travellers must present a negative Covid-19 PCR test result that is not older than seven days at the port of entry.
Shangula noted they will not be required to be quarantined or to be subjected to another test including when exiting Namibia.

“The period of 168 hours is reckoned from the time the sample was taken. Namibian citizens may enter Namibia with or without any result. In the absence of any result, they will be subjected to a 7-days quarantine and testing at own cost,” Shangula emphasised.
The period within which the human remains of persons whose deaths are attributed to Covid-19 be buried remains seven days.
- anakale@nepc.com.na