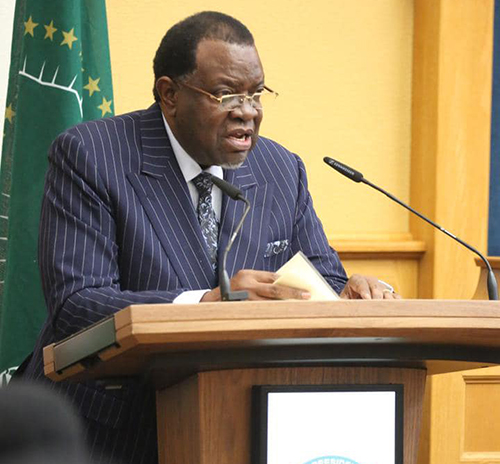 President Hage Geingob has thanked opposition parliamentarians for their input and orderly behaviour during last week’s state of the nation address. Geingob addressed a joint sitting of parliament last week, while he also used the occasion to update the nation on new initiatives undertaken by government. This year’s address relatively went smoothly with no disruptions.

“The conduct of ordinary Namibians from all walks of life, young and old, in the discussions around the state of the nation address last week have been exemplary and in keeping with our enduring rallying cry of One Namibia, One Nation,” Geingob said.

“You have all made it possible for me to deliver a state of the nation address on 6 April 2022 to parliament, which I am convinced spoke to the scale of our challenges and our ambitions as a nation. Indeed, as we march forward as a stronger, just, and united country, the foundations of the Namibian House have been firmly anchored.”

Geingob also congratulated the Speaker of the National Assembly Peter Katjavivi and his deputy Loide Kasingo, as well as the chairperson of the National Council Lucas Sinimbo Muha, for officiating over the activities of the day admirably.

He also complimented the Swapo MPs for their usual cooperation, resilience and robust support of the policies and activities of the Executive. During last year’s SONA, National Assembly descended into chaos when a brawl between security forces and parliamentarians belonging to the Landless People’s Movement (LPM) broke out.  Security officials had sprung into action after Katjavivi ordered them to evict a defiant LPM leader Bernadus Swartbooi shortly after President Geingob had delivered his address and was taking questions from the opposition. While being escorted out of the House, Swartbooi also knocked off the ceremonial mace from its stand, leading to heightened tension inside the chamber.

It was at this point that his deputy, Henny Seibeb, ripped up a copy of the Harambee Prosperity Plan in front of the President’s bench. Seibeb was shoved, carried, and manhandled out of the chamber, forcing Katjavivi to suspend the joint sitting.

Afterwards, the duo was temporarily suspended from parliament. Geingob said last week’s session reaffirmed his faith in the ability of the Namibian people to unite and rally behind the country’s shared objective of a stronger, just, and united Namibia. “I can say that I am a proud Namibian,” he said.

Geingob said the past two years have been exceptionally difficult with the Covid-19 pandemic creating a lot of uncertainties and placing indefinable stress on governance and socio-economic architectures. Despite the differences in the country, he stated that the country has been able to overcome these enormous obstacles in order to reimage itself and be on a path of progress and development.