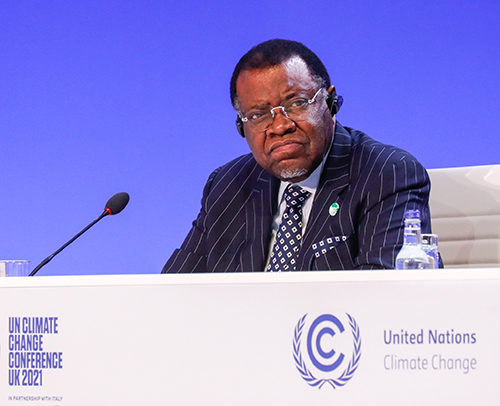 As a result of the negative impacts of climate change on its people and industries, Namibia is uniquely positioned to play a vital role in crafting solutions needed to make an impactful difference by accelerating clean technology.

“As government, our role is to facilitate the development of our green and blue economies – and to this end, we decided to prioritise the urgent development of green hydrogen assets in Namibia to manufacture the critical electrons and molecules needed to decarbonise our energy system,” Geingob said yesterday while speaking at the world leaders’ summit in Glasgow, United Kingdom.

Namibia bears the brunt of serious climate change implications arising from emissions from developments elsewhere, but the country has looked for sustainable solutions.

“We have just designed, floated and are about to award the largest tender in our nation’s history in record time to accelerate the deployment of innovative technology in the development of renewable energy and related value chains – signifying our acceptance that there is no more scope for business as usual in these dire times,” shared Geingob.

Geingob said the request for proposals floated recently, advocated for speed and urgency. The project challenges interested developers to state their ambitions in terms of the scale of electrolyser deployment within a short period.

“In keeping with our respect for the environment, we rewarded developers for illustrating how all this would be done in harmony with the flora and fauna of the Tsau ǁKhaeb (Sperrgebiet) National Park,” stated Geingob.

He said they championed policy and supporting legislation that accelerated the deployment of clean technology and looked to foster innovative approaches to decarbonise Namibia and the broader global energy landscape.

“To ensure that we capture as much of the value chain locally as possible for our citizens, we have established a national green hydrogen research institute, which will inculcate the latest cutting-edge technologies into the classrooms and syllabi of our tertiary institutions,” said Geingob. He said the resulting proposals received estimated the number of potential jobs to be more than 30 000, more than doubling the region’s existing levels of employment.

“More profoundly, they also paid homage to the people of that region and advocated for the formation of a regional development fund, over and above the requirement to contribute to Namibia’s soon-to-be-launched sovereign wealth fund,” he mentioned.

A sovereign investment fund or social wealth fund is a state-owned investment fund that invests in real and financial assets such as stocks, bonds, real estate, precious metals, or in alternative investments such as private equity funds or hedge funds.