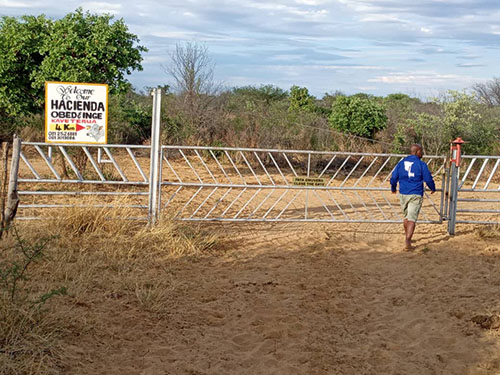 Inge Kaveterua and her husband, Obed have managed to turn a bushy, open field in the middle of nowhere into a fertile ground for their business, Hacienda Farming - both figuratively and literally.

Hacienda Farming, located some 45km north of Otjinene in the Omaheke region is the epitome of hard work and dedication, as the family’s persistence over the years appear to be paying off.

Hacienda is a Spanish word for «a large estate or plantation with a dwelling house». At Hacienda Farming, Inge and her husband have done more than just erect a dwelling.

The couple produces the sought-after traditional ghee, or ‹Omaze wozongombe’ as the product is known amongst those that have come to be frequent customers.

The ghee is made the traditional way, with no additives to its unique taste. From a handful of milking cattle they keep, the couple has also managed to produce fresh cream and garlic butter as by-products of the milk which is produced in large quantities.

But, as Inge explains, the journey to present-day Hacienda farming has been a long and winding one. It all started in 2005 after toying with the idea of selling the excess ghee that the family could not use.

“I realised that there is a market for selling the traditional ghee, as it is a product many people are after. At first, I would make this for myself and the family but we couldn’t use up all of what we produced and ended up just giving it away. That is when I realised that I could instead sell this product to make money,” Inge said.

At the top of the priority list for the couple, Inge explained, was the need to add value to the milk, which the Hacienda’s cattle produced, hence the traditional ghee.

As milk became even more abundant, the family turned to producing cream and garlic butter, using Inge’s own recipe.

“The plan has all along been about how we can get the best from the milk we produce. Traditional farming, which dictates that milk is all we get from the cow needed to change. There is surely more we can do with that milk,” she said.

The family started with a mixed-breed of cattle for its first production of ghee in 2005, but soon worked its way up to adding cattle with higher milk yields.

They now keep a few Braunvieh cattle, or Brown Swiss as it is also known which are the main provider for the thriving business. The family also keeps Simmentaler - a breed highly revered for its beef weight and milk quantities.

Of late and with offspring from both the Braunvieh and Simmentaler, the family has managed to have a mixed breed of cows that equally produces large milk quantities for the business.

“We realised that carrying on farming as our ancestors did several years ago, was not going to help us in this modern era. As such, we concentrated on turning farming into a business that will support us and also fulfil our passion for farming,” Obed noted.

Both Obed and Inge are employed on full-time basis in Otjiwarongo, several kilometres from their Hacienda, but they have managed to make both their work and business work for them through a delicate schedule.

“We travel to the Hacienda almost every other week to check on progress and do what must be done. Sometimes we rush there unplanned to prepare and finalise an urgent order too. It’s all about proper planning,” he said. Yearning for more diversification of farming activities, Inge has also recently added chicken production to the business. The eggs, which are produced through intensive production (cage system), are also sold from the same business premises.

Inge advised women to come up and take the lead in farming ventures in any way possible, as the market is big enough for all to share. Sitting back and waiting on men to do it all for you, she said, does not work anymore.

“This is modern farming. We do things side by side. Don›t be left behind, that time is long gone,” she said.