Home / Khomas plans ahead of disasters

Khomas plans ahead of disasters 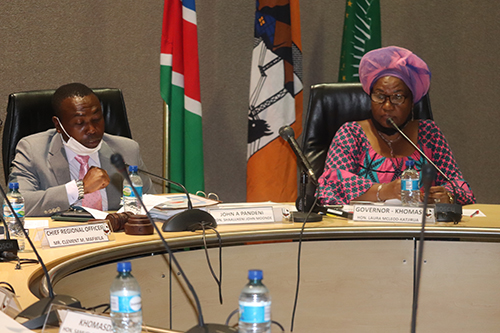 “I am highly delighted that our two governing sub-national structures in the region have identified the missing linkage of communication and coordination, and they are currently hard at work to mount that needed concerted response to this life-threatening disaster,” the governor said during the recent official opening meeting of the Khomas Regional Council.

According to McLeod-Katjirua, the year 2022 has started with a challenge of flash floods, which mainly affect residents living in riverbeds and those who have erected homes in risky flood-prone areas. John Moonde, who chairs the regional disaster risk management committee, concurred with the governor on the flash floods that occurred recently.

“Our people, especially those who reside in the informal settlements are experiencing hardships due to flash floods. The flash floods have caused devastating consequences on our people.

The impact includes damage to properties, leaving some residents homeless, destruction of the environment and loss of livelihoods,” he said. He added constituencies currently affected and prone to floods include Khomasdal, Moses ǁGaroëb, Tobias Hainyeko and Samora Machel.

Mcleod-Katjirua further listed the rate of influx or urbanisation as a bone of contention and continues to put a heavy burden on the meagre resources and constantly influence the service delivery in general.

“Therefore, we must be much focused, far-sighted and keep our heads up to always see new stages of opportunities and strength to plan beyond this challenge,” she added.