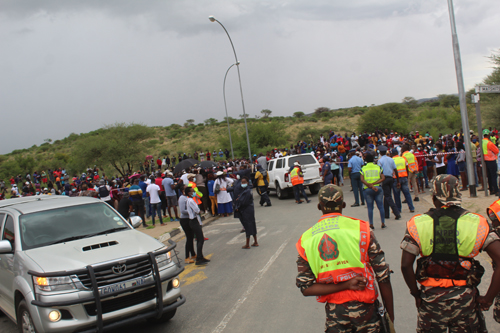 More than 500 residents of Windhoek attempted to occupy land yesterday in the Otjomuise area. The group was calmed down by police after deputy Windhoek mayor Clemenencia Hanases promised them council would find a solution to the land issue in the next two weeks.
“I want to plead with you to give us time. We will get back to you after next week because we will be on training for the whole week. Please go home and wait for the feedback,” she said.

During the address by the deputy mayor, the group demanded to see mayor Job Amupanda.
A landless resident of Otjomuise Lavinia Nakale said she decided to grab land because of the harsh conditions of her current home.
“If we go there now, my shack has been flooded because people are dumping waste behind my house. Now, the water is flowing in my house. I want proper land,” she fumed.

Another resident Ngongo Felix said he was tired of living in someone’s house.
Khomas regional commander Commissioner Josef Shikongo urged the masses to be obedient and wait for the council to give them feedback before dispersing the crowd.
- ljason@nepc.com.na