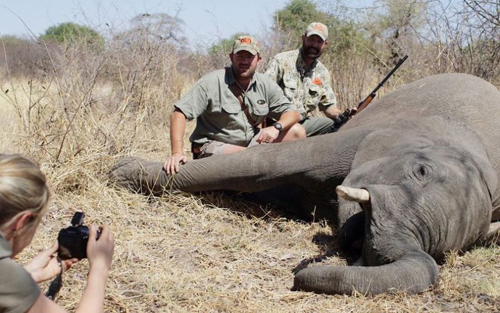 Air Namibia’s liquidation could result in the collapse of the local hunting industry, which has over the years relied on the national airline for trophy transportation.
Most foreign airlines have banned the transportation of parts of animals killed in hunts on the African continent, owing to international pressure.
Namibia alone generates about N$100 million annually from trophy hunting, with Air Namibia used by hunters to transport their trophies home.

The country has 86 registered wildlife conservancies, which depend largely on funding from trophy hunting. Environment minister Pohamba Shifeta has in the past warned that a ban by airlines on trophy transportation would hurt the country’s economy and conservation efforts.
The Namibia Professional Hunters Association (Napha) expressed concern that some foreign airlines have refused to transport trophy hunters to and from Namibia.

“Napha is concerned about the transport of arms, ammunition, and trophies, as some foreign airlines are declining to transport such items, whereas Air Namibia was a trusted partner bound by the Namibian constitution,” Napha CEO Tanja Dahl indicated.

She explained some foreign airlines are distancing themselves from transporting trophy hunters due to international pressure by animal lovers. Dahl, however, argued that if trophy hunting is done sustainably, it will in return promote conservation hunting which has benefits to local communities and the broader environment.  Conservancy managers normally allocate 50% of the income from tourism concessions and hunting activities to community development projects. Some benefits come from trophy hunting.

The benefits derived from conservation include income generation, job creation, rural electrification and water infrastructure. Over the years, Namibia has opposed the international pressure against trophy hunting, arguing that such a ban will harm the country’s conservation efforts. Namibia is one of the world’s most successful wildlife conservation stories, with many stable or endangered animal populations increasing in numbers.

The ministry of environment could, however, not give the exact figure on the number of applications received since the reopening of borders via the Hosea Kutako International Airport for inbound tourists last year September.

Besides last years’ ban on air travel which affected trophy hunting tremendously, as no visitors were allowed into the country, such visitors now face a mammoth task to find airlines that will allow trophies and arms on their aircraft. The ministry said late last year the ban also affected the trophy hunters because they couldn’t come in to hunt and this in return affected the conservancies because they were not generating any income.

Napha, which is an umbrella bodied under Fenata, was founded in 1974 to promote Namibia as a hunting destination internationally and protect the right to hunt locally. To date, Napha has over 400 hunting professionals as registered members.
Traditional source markets such as Europe, have benefitted from the Air Namibia’s Frankfurt-Windhoek route immensely in bringing in large numbers of tourists from that part of the continent.

Federation of Namibian Tourism Associations (Fenata) chairperson Netumbo Nashandi said Namibia would do well if it starts by repositioning and marketing destination Namibia to the markets that have direct flight access to the country. “Then momentum can be carried from there moving forward, as well as exploring attracting more airlines to fly directly to the Land of the Brave,” she said.

“The Covid-19 pandemic and this liquidation further illustrate the importance of creating an enabling environment to ensure tourism thrives from a diversified pool of source markets – such as the African diaspora as well as leveraging intra-African tourism.
The tourism economy will revive, just not in the traditional manner we expect it to. As patriotic Namibians, we want to remain hopeful, that a rescue of Air Namibia under a healthy private-public partnership (PPP) of sorts, can emerge.”

Government last week announced it has filed for voluntary liquidation of the troubled national airline, leaving over 600 workers without jobs.