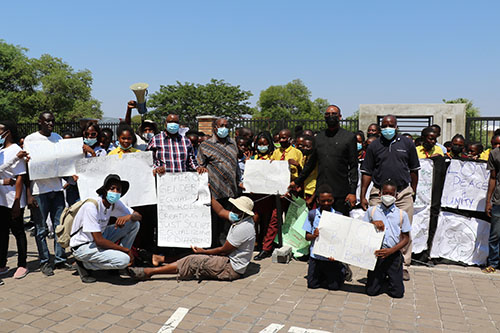 Katima Mulilo - The mother of a three-month-old baby boy who was allegedly brutally killed by his biological father in early October in the Choto location in Katima Mulilo, has called on the authorities not to even consider giving bail to the alleged perpetrator.

A teary 25-year-old Mutinta Lilungwe made this plea during an interview with members of the media on Friday.

“My heart is bleeding, and I don’t think I can even face him if he were to be released.  He should rot in jail so that he repents for what he did. I don’t want him to be given bail, because I don’t know what is going to happen if he is released. ” stressed Lilungwe.

The interview came after the Zambezi Youth Empowerment Programme (ZYEP) group held a peaceful demonstration to hand over a petition to regional governor Lawrence Sampofu over the senseless killing of the infant.

The visibly distraught mother narrated how she was a victim of GBV at the hands of her partner, 29-year-old Malumo Lishokomosi. The two also have an 18-months-old child, while Lilungwe has another child from a previous relationship.

She explained that she was in an abusive relationship, and this resulted in her giving birth at six months.

Things got worse after the birth of her baby boy in June, who was expected to be born in September, as the boy’s father started questioning the paternity of the baby. Lilungwe said since she knew that Lishokomosi was the father, she agreed to go for a paternity test.

“His family members were the ones who were brainwashing him, telling him that it is impossible for a baby born at six months to weigh 2.4 kg. I told him that if he didn’t believe that he is the father, he could walk away, but he didn’t do that. He was even absent when our first child was born. One of his sisters who lives in Windhoek called me, and we agreed to go for a paternity test in July.

However, I understand he is the one who called her to convince her that they shouldn’t do a paternity test because the baby looks like him,” she added. Lilungwe said things got out of hand on the night of 1 October after Lishokomosi had gone on a drinking spree with a friend.

An argument broke out, and he demanded that she hands over the mobile phone they shared.

“The phone was soaked that day because it rained, so I had put it in mealie meal for it to dry. I tried to explain to him, but he was not listening since he was drunk. So, I took the phone and gave it to him. He, however, slapped me. He continued to attack me, at one point taking a hammer and hitting me on my left leg. He later knocked me down with a bottle of beer,” she narrated.

She added that the confrontation continued, and he threatened to kill her and her baby. The noise drew the attention of the neighbours, who rushed to their place to come and help. The door was locked, and the people tried to break it down. It was then that Lishokomosi took the baby and tossed him to the roof of the house.

“My baby just cried once, and died. By this time, people from outside had forcefully opened the door, and I managed to run out with my baby. But it was too late as he was already dead,” she stated.

Lishokomosi was arrested on the same day, and was remanded in custody when he appeared in the Katima Mulilo Magistrate’s Court on 5 October. The case was postponed to 2 December for further investigations.

Meanwhile, in the petition read by Riaan Siyama, ZYEP called on stakeholders in the region to avail resources needed in the fight against GBV.

“This petition serves to inform all stakeholders, civil servants, traditional authorities, religious organisations, NGOs, governmental institutions as well as business institutions of the urgent need for their involvement in the fight against GBV, and violence in general, within the Zambezi region, by all means necessary. This includes availing resources and the necessary assistance and support to the community.

All bodies responsible for organising educational projects aimed at creating awareness and eradicating violence in the community should be held accountable in the event that they do not deliver that which is required of them. Police officers and law enforcers should be sensitised on how to engage the public during confrontational encounters,” stated Siyama.

The group also appealed that “when dealing with GBV cases, all victims should be given the same service and treatment, regardless of their gender, and likewise all perpetrators should be dealt with accordingly, irrespective of their gender.

We should also look into giving emotional support to the perpetrators as we feel that in most cases, they are just left out and will sometimes go back to the same society without any proper rehabilitation.”

Upon receiving the petition, Sampofu thanked the group for their conduct, and promised to share the concerns with the relevant people for action.