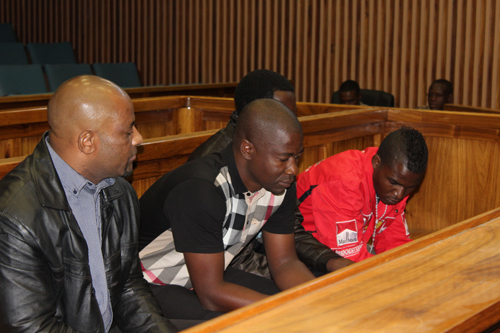 One of the four men, accused of killing renowned stock theft investigator Hiambepo ‘Major’ Kazeurua, yesterday gave notice that he will apply for retired Windhoek High Court Judge Alfred Siboleka to recuse himself from the matter.
Advocate Slysken Makando, on behalf of Stockley Kavejao (44), told the judge he received instructions from his client on the eve of the resumption of the trail after a hiatus of about two and a half years to seek the recusal of the judge.

Depending on the outcome of the application, the matter was provisionally set down to continue on 26 July for the defence case after the State closed its case in September 2019.
The matter has since suffered several delays, including applications for bail by two of the accused still in custody and appeals after bail was refused.

Siboleka also retired as a sitting judge of the High Court and is now an acting judge while he finalises his remaining cases.
Mbanga Siyomunji, on behalf of Matheu Kakururume (33), informed the judge they were taken by surprise by the application, as they were ready to proceed but that they have to accept, as it is Kavejao’s right to bring such application.

Muvare Kaporo (29), who does not have a legal representative after he lost the services of Monty Karuhaihe, was informed by the judge that he now has the opportunity to either approach Legal Aid for a lawyer or find someone to represent him on a private basis.

The private lawyer of Afas Kamutjemo (42) said he and his client is unhappy about the events that unfolded. According to Jan Wessels, his client is paying for every time he appears in court and he was looking forward to finalising the matter. He indicated that neither he nor his client will attend the recusal application hearing. All of the accused pleaded not guilty to charges of murder, stock theft and defeating or attempting to defeat or obstruct the course of justice.

They put the onus of proof on the State for every allegation against them.
According to the indictment, the accused conspired to kill Kazeurua to prevent him from tracing cattle they had stolen – and Kaporo and Kakururume ambushed him and killed him by strangling him and throwing sand in his mouth to prevent him from breathing.
This allegedly happened on 28 December 2012.

The partly burned body of Kazeurua was found in an aardvark burrow on 7 January after he was reported missing days earlier.
Kakururume and Kaporo remain in custody, while Kavejao and Kamutjemo are out on bail.
- rrouth@nepc.com.na