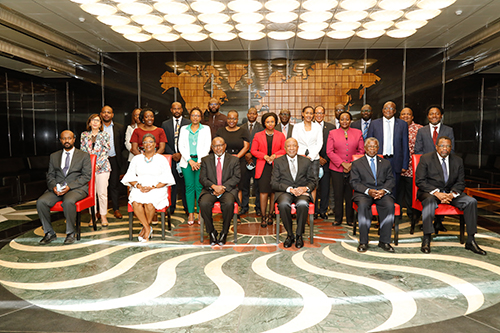 Vice President Nangolo Mbumba has urged stakeholders in the country to fully support the work of the country review mission and actively participate in its deliberations for Namibia to receive a comprehensive report.

Mbumba was speaking during the official launch of the African Peer Review Mechanism (APRM) country review mission to Namibia at the State House yesterday.

The APRM is a mutually agreed instrument, established in 2003, which member states of the African Union have voluntarily acceded to as part of an African self-monitoring mechanism for measuring performance in their governance.

It reinforces best practices and achievements, rectifies deficiencies in governance and socio-economic development processes and encourages transformational leadership on the African continent.

The mechanism’s position is to drive effective governance among participating member states in the four thematic areas of democracy and political governance, economic governance and management, corporate governance and socio-economic development.

According to Mbumba, to strengthen effective governance, Namibia voluntarily acceded to the APRM in January 2017, while President Hage Geingob inaugurated a 13-member national governing council in November 2019.

The governing council was inaugurated to serve for three years, with a clear mandate to provide strategic guidance of the APRM processes in Namibia.

“Happily, last year, the national governing council commenced the process of undertaking the country’s self-assessment report that paves the way for the African Peer Review Mechanism to conduct a fully-fledged review of the Republic of Namibia in 2021. It is in this context that the University of Namibia conducted the country self-assessment report from 1 September 2020 – August 2021,” he said.

Mbumba explained that the country self-assessment report is a critical component of Namibia’s full review report as it signals its preparedness to conduct a base review.

“The most important component of the country self-assessment report is the development of the national plan of action, which a country is required to implement,” he stated.

The chairperson of the APRM panel Obeni Sefue, who was accompanied by the body’s CEO Eddy Maloka, said 41 members were currently signed up by the APRM.

He added delegates from 11 countries such as Namibia, South Africa, Tunisia, Zimbabwe, Nigeria, Liberia, Mali and Lesotho are part of the Namibian country review. - ljason@nepc.com.na