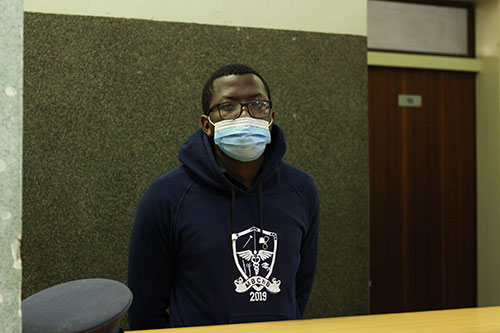 The results for laboratory tests for semen obtained in the case of a medical intern at Katutura Intermediate Hospital, accused of raping an 18-year-old male patient, have come back negative.

This is according to investigating officer Warrant Esther Kauwiwa, who took the stand yesterday in the Katutura Magistrate’s Court as the State’s first witness in the formal bail application of Dennis Noa (26).

Kauwiwa said despite laboratory results indicating that there was no semen on the victim, it does not exonerate Noa from the alleged crime committed. Noa is currently facing a charge of rape and has been in police custody since his arrest on 12 April. “The exclusion of semen does not mean that rape did not occur as rape happens in many forms and people these days are using different kinds of objects. Rape does not only occur by means of insertion of the penis but other objects as well,” explained Kauwiwa.

Adding that the State is still waiting on other laboratory results and additional witness statements are yet to be taken.

The investigating officer strongly opposes bail, saying despite Noa’s denial of the allegations, two witnesses saw him with the victim.

Furthermore, he was the last person to have been seen in the company of the victim.

Kauwiwa said according to the information at hand, on Sunday 11 April, Noa was seen wheeling the victim from the head injury ward to the conference room and locking the door behind them.

Noa was allegedly questioned by a witness where he was taking the patient to which he answered that he was taking him for physiotherapy, which is situated on the ground floor of the building.

However, investigations revealed the physiotherapy unit is not operational during weekends. Thus, there was no need for Noa to take the victim for therapy. Kauwiwa further testified there was no referral letter indicating the patient needed to be taken for therapy, which is a standard procedure at the hospital.

Noa allegedly returned the victim to his ward. An unopened condom and tissue were found on the victim’s bed.

The victim was admitted to the hospital at the time after he was involved in a car accident from which he obtained head injuries.

“According to the witnesses, the victim was lying on his back but when the accused returned with him, he was lying on the side. There is no way he can turn by himself as he is physically incapable of doing so,” explained Kauwiwa.

Kauwiwa informed the court the victim was physically impaired – incapable of giving consent.

Kauwiwa testified Noa is not a good candidate for bail as he has already tried to intimidate one of the State witnesses who is his former colleague. Thus, granting him bail will not be in the best interest of justice or the administration of justice.

At the start of the hearing, Noa who took the stand to testify in his defence denied any wrongdoing.

According to him, while on his way to take the patient for physiotherapy, he passed by the conference room to collect his books.

The hearing is scheduled to continue today before magistrate Esme Molefe.