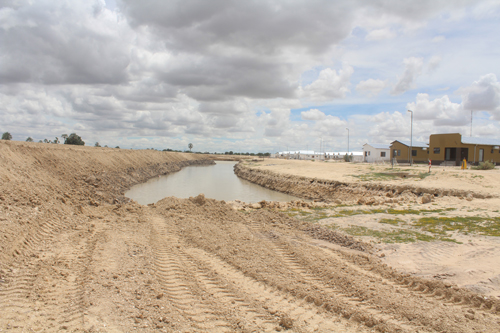 OSHAKATI – The Oshakati Town Council has embarked on the construction of an embankment to mitigate both flash and seasonal floods, which have been haunting the local authority over the years.

The embankment will create a channel for both storm and floodwater to flow to floodplains without affecting the residents. The areas benefitting from the embankment include Ehenye, which has been flooded for the last two years.
Acting CEO Kornelius Kapolo said the ongoing project includes the deepening of the river to create easy access of water flow.
“The embankment will catch both storm and floodwater and will ensure that the two do not mix and affect the residents,” said Kapolo. The acting CEO said the embankment will also ease floods at Onawa, which also gets flooded. Kapolo said there are other projects at Ekuku, Oneshila and other parts of the town to divert water from the residential areas.

Kapolo said there is already an embankment at Oneshila; however, council will now also strengthen it to ensure the area is not hit by the flood.
He said the council is also busy constructing water channels across the town. Kapolo said the embankment was anticipated to have been completed before the rainy season but assured it will be completed very soon.

He assured previously flood-affected victims that the council is ready to relocate residents to higher lands should they be flooded.
“We have to be ready for any eventuality during the rainy season and the council is ready to relocate people if need be,” said Kapolo.
During the past few years, the council has been relocating hundreds of people to higher lands after they were flooded.
Last year alone, by February, 950 people, constituting of 172 households, were relocated and were housed in 73 tents at the town. -nashipala@nepc.com.na