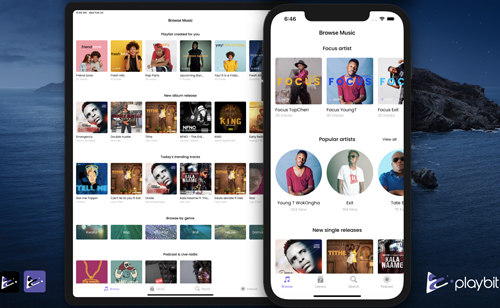 With digital music rising globally, software developer, Mathew Johannes has recently created an online music streaming service that enables artists to distribute their music to digital stores and also allows users to listen to music content from different artists as well as podcasts.
Created last year, PlayBit is aimed at preventing piracy and illegal copying of music in the industry.
“With this application, every single play/stream guarantees the content creator/artist royalties,” said Johaness adding that artists can also release albums exclusively with PlayBit for earnings on streams and downloads.

Johannes further explained that once the application is installed, users will be notified of every new music or latest album that gets on the app through push notifications.

“ The market side is huge than one can expect because this would mean if the app has 50K+ all 50k users get notified once. 50k people out there in one second will be aware of the new music which is released on PlayBit,” he said.
Johanness said artists will have 100% insight into their music in terms of growth and earnings generated and they can withdraw this revenue through “PlayBit for Artists App”.

“Users will get unrestricted access to both music and podcasts content via the premium feature. Users will be required to have at least one token to play a song full. Non-premium will get a taste of every song for a length of one minute. Beyond that you will be required to purchase tokens on the app, tokens are cheap as 10 cents per token which leads to 1 U.S. Dollar (USD) for 98tokens, 3 USD 390 tokens and the mega for 12 USD for 1165 tokens,” he further explained.

According to him, users are required to have at least 30 tokens for downloads to play the downloaded music offline under their library layout within the app.

Johannes described the app as ‘returning to growth’ after piracy brought artists to their knees in the 2000s.
“We are protecting music on this kind of level and generating revenue for artists. Unlike back in the days when people would duplicate music, PlayBit does not allow piracy,” he said before urging artists to release their music with PlayBit.
PlayBit can be accessed on various devices and platforms such as IOS, Android, Windows and macOS.
-ashikololo@nepc.com.na