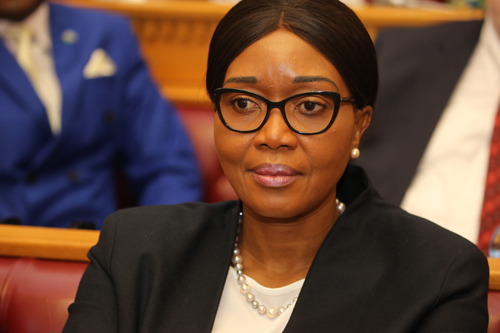 Prime Minister Saara Kuugongelwa-Amadhila is not losing any sleep over next year’s Swapo elective congress. She says serving the Namibian people under her current portfolio is the only thing on her mind.

Next year, Swapo will hold its intraparty elections to deploy cadres into various positions, including the position of president, vice president, secretary general and deputy secretary general. The party will also elect individuals to its about 87-member central committee, as well as the political bureau. Nampa interviewed Kuugongelwa-Amadhila to hear if she has ambitions to take up a leadership position at party level as is being anonymously purported by Swapo sources.

She was unperturbed by congress, saying the party has systems, processes and institutions in place to identify its best suitable cadres. “Swapo has its systems for deploying its cadres and all of us usually focus on optimising the execution of the tasks that we are assigned to do, instead of preoccupying ourselves with other things that the party has a way of dealing with,” she said.

The premier added: “I am not really thinking about that [congress]. I am thinking about the multiple challenges our country faces.” According to her, Namibia is confronted by a myriad of challenges that are enjoying her undivided attention.
These include the economy, implementation of resolutions of the second land indaba, Harambee Prosperity Plan 2, housing and urban land delivery.

In a separate interview, Netumbo Nandi-Ndaitwah, who is the current Swapo vice president, indicated that preparations for next year’s congress are afoot, acknowledging that since the party’s presidency became open for contestation in 2017, it has been a thorn in the flesh. Unlike current Swapo leader Hage Geingob, his predecessors Sam Nujoma and Hifikepunye Pohamba were never challenged for the party’s highest position while in office.

“Since we started the position of president to be contested, we have challenges. But you can’t avoid it because where there are people contesting, there must be a winner and a loser. But people must be sincere when you lose; you cannot say you are being chased out,” she said.
Nampa also spoke to political analysts, who agreed that the 2022 congress could be a defining moment for Swapo.

This is because, for the first time, Swapo goes into congress with reduced popularity at successive polls, having lost its two-thirds majority in the National Assembly in 2019 and reduced to the opposition in major municipalities such as Walvis Bay, Swakopmund and Windhoek.
Geingob’s popularity too waned, while the party finds itself at the centre of Namibia’s biggest corruption scandal: Fishrot.
Fanuel Kaapama said it is an open secret that Swapo is a polarised entity.

Its polarisation can be attributed to factions that emanated from the 2017 congress, which saw many emerge bruised politically, he said.
If history is anything to go by, Kaapama said, Swapo has struggled to deal with the transition of power, especially during the final term of their sitting president.

“During Sam Nujoma’s last term, that congress led to factions of some people supporting [late] Hidipo Hamutenya, while others supported Hifikepunye Pohamba. This later birthed RDP. Now we are seeing that a faction came out early during Geingob’s first term and birthed IPC. The question really is, what would this congress give birth to or have Swapo leaders learned anything at all [from the past]?” he said.
He went on to say: “If their leaders at all levels are aware of the party’s challenges, they need to address them because if not properly handled, it will lead to the demise of the party. Swapo is its own worst enemy”.

For Kaapama, it is up to Swapo to elect leaders who can unite it at this crucial hour.
“Characteristics of a leader are not given. They are shaped by the environment, and for a leader to restore Swapo to its previous glory, they need to recognise the challenges of the party and collectively unify it. It is not one person’s character that will save the party; it is the overall character of the power brokers and key decision-makers that matter,” the analyst opined.

Another pundit, Ndumba Kamwanyah, said Swapo has ample time to prepare for congress. “They are still divided – and if they go in divided, it will be a disaster because it is close to the 2024 election. There is a need to have individual talks with those who differ. They need to forgive each other and find ways forward together; otherwise, the demise of the party will start at that congress,” Kamwanyah said. Like Kaapama, Kamwanyah could only point to characteristics needed by the next Swapo leaders.

“The party should look for a strong leader – someone to unify the party; someone who is able to lead beyond the camps and works across. At the same time, it should be a leader with an understanding of our country in terms of economic challenges faced today,” he said.
- Nampa