Regions ‘equipped’ to deal with disasters 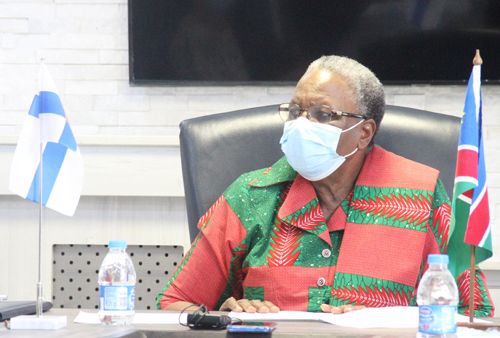 Deputy Prime Minister Netumbo Nandi-Ndaitwah says regions have multi-hazard contingency plans that are activated upon an outbreak of a disaster.
In an interview with New Era, she said the plans make provision for availing resources at the regional level to be utilised during a disaster such as flood.

“If the disaster is beyond the capacity of a region to deal with; the Disaster Risk Management Act no. of 2012 allows for the declaration of a national disaster so that more resources can be mobilised towards response,” she clarified.
She cited an example that to facilitate the movement of people during floods, between Katima Mulilo and Impalila Island of Zambezi region, the Richard Kabandjani boat is utilised to ferry people between the two areas.

Besides, she added, canoes are also placed at specific schools to facilitate localised movement during flooding.
“Upland areas in each flood-prone region are already identified in the contingency plans, where people can be relocated once inundated. As has been done in the past, relief supplies, mostly non-food, including tents are permanently pre-positioned in strategic regional storages for flooding areas, and the monitoring of the situation continues throughout the rainfall season,” Nandi-Ndaitwah stated.

Equally, she said, there are also tools such as crop assessment and vulnerability, as well assessment and analysis used to determine the preparedness of farmers for cropping activities and the impact of a specific hazard on the livelihood of community members.
Another contingency plan is the malaria control programme, which involves the spraying of houses and distribution of mosquito nets is ongoing in all malaria-prone regions, as well as the training of staff on case management by the health ministry.

Health workers are trained yearly to be able to identify and recognise other water-borne diseases for prompt action.
Therefore, she said, health centres are provided with guidelines for disease management, as well as repositioning of resources for the treatment of patients.

Amongst the crucial resources stocked in high-risk regions include intravenous fluid, malaria and cholera medication.
Furthermore, permanent resilience building solutions by sectors are ongoing. These, she says, include sectoral risk reduction activities, including but are not limited to improving drainage systems, waterways, river ways to divert floodwater from flood-prone areas to protect lives and properties are ongoing.

“The key message is prevention is better than cure. As we continue to experience heavy storm as a result of the cyclones that have hit Mozambique, the Office of the Prime Minister would like to caution all communities in Namibia, particularly those in flood-prone areas to heed to the early warning alerts by the hydrological and meteorological services and to cooperate with local disaster risk management structures, relocate to safer higher grounds (if need be) to protect their lives and properties,” she advised.

The government has also pleaded with those relocated to refrain from returning to flood-prone areas, as they would only be risking their lives.
Communities in flood-prone areas are further advised to move to safer ground on their own to prevent a situation of relocating a lot of people in one centre, a situation that may interfere with Covid-19 protocols.

She indicated the National Disaster Risk Management Committee in the Office of the Prime Minister, together with the Regional Disaster Risk Management Committees under the leadership of regional governors, has been active throughout 2020 and continues to be active in 2021.
These committees, she explained, have been at the forefront of coordinating the country’s response to multiple experienced disasters, ranging from the prolonged drought, Covid-19, armyworms, locust outbreak, foot-and-mouth outbreak and the Twaloloka fire incident in Walvis Bay last year.
- anakale@nepc.com.na