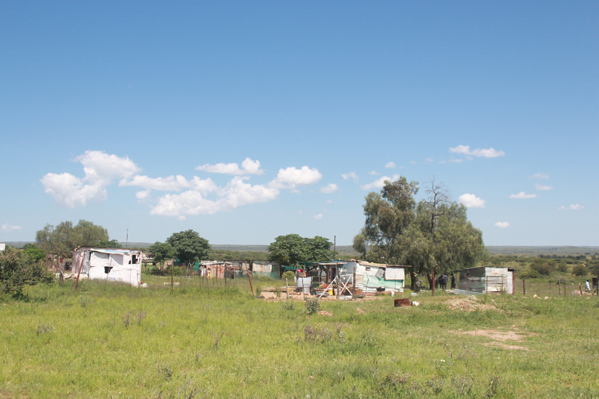 ONGOMBO WEST - The first farm to be expropriated in Namibia, Ongombo West, has been turned into a white elephant as resettled farmers struggle to maintain the property and put it to good use.

Former farmworkers who were resettled on unit A are visibly struggling at becoming productive farmers, while most residents occupying the property are unemployed and relying on good Samaritans for survival.

One of the residents who spoke to New Era Wosaria //Kharises explained that most of the residents are dependent on a good Samaritan, a local farmer, who has been providing households on the piece of land with food parcels.

//Kharises said many people on the farm are sitting idle and waiting for government handouts instead of utilising the fertile soil at their disposal.
“We have a very nice fertile land, however, we do not have water on this farm. We normally walk through other farms to go fetch water. The situation has turned against us because the farm owners have now opened criminal cases of trespassing against us,” she said.
In its heyday, the farm situated 30km northeast of Windhoek, exported flowers to the lucrative European market.
Government expropriated the farm in 2004 following a dispute between the farm owners and workers.

This process gave resettled families access to 4 000 hectares of land, of which the majority is today lying idle.
//Kharises added people have resorted to the illegal sale of alcohol to generate income for survival instead of depending on farming as initiated by the government.

Another resident, who refused to be named, said their deplorable living conditions could improve had the government fulfilled its promises to provide them with water infrastructure and livestock.

Chief of the /Khomanin Traditional Authority Juliana Gawanas said she would engage the government on issues highlighted by the community.
“On the issues of the tense relationship with the commercial farmers, we will convene a meeting with the farmers’ community, central government representatives and us to interrogate, mitigate, resolve and restore the relationship in the public interest,” she said.
- ljason@nepc.com.na