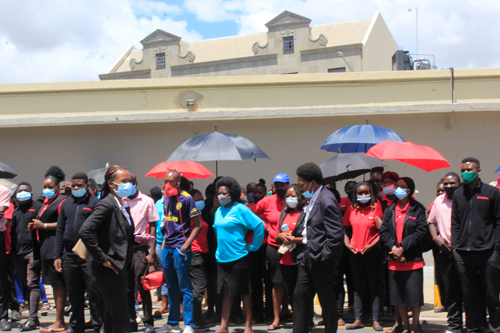 Over 400 workers employed by Shoprite, Checkers and Usave have since returned to their work in the middle of an indefinite strike over better pay, citing financial distress and fear of losing their jobs.

The return of the 421 workers came at a time when Shoprite Namibia elected to employ 390 ‘fixed term’ employees last month as a replacement for workers on strike.

This decision forms the basis of a court challenge yesterday. On 23 December last year, a total of 2 042 workers went on strike after they could not reach an agreement for better pay and benefits with their employer.

Without reaching consensus last year, the employees through their union, the Namibian Food and Allied Workers Union (Nafau) approached the labour court on an urgent basis for the court to interdict Shoprite from using ‘fixed term’ employees to carry out duties of employees who are currently on a lawful and protected strike.

During an oral hearing yesterday before Judge Shafimana Ueitele, local lawyer Nixon Marcus who is representing the disgruntled employees argued Shoprite violated the strike and lockout rules that were signed by both parties - indicating no employee may perform duties, functions or work of a legally striking employee.

Marcus further noted workers would suffer irreparable harm if Shoprite is allowed to continue violating the strike and lockout rules.
“The striking power is rendered hollow and ineffective by the employment of ‘fixed term’ employees or ‘seasonal additional staff’ where these employees are performing the work of striking workers. The conduct by Shoprite clearly diminishes the ability of the workers to compel Shoprite to return to the negotiating table,” said Marcus.

However, Shoprite has denied these allegations. Their lawyer Absalom Wihelma emphasised it was the company’s custom to employ ‘fixed term’ employees or ‘seasonal additional staff’ during peak seasons.

“The fact that some of the employees are on strike, does not suspend the duties and obligations of the employees who are not on strike, irrespective of whether it is a fixed term or permanently employed individual,” explained Wihelma.
“Fixed term employees were assigned these positions and responsibilities before the notification of the strike was given and the strike rules were signed.”

According to Shoprite, management staff are not prohibited from doing the work of striking workers as they do not form part of the bargaining unit. He argued that the labour court does not have jurisdiction to grant a final interdict sought by the employees. He said the employees failed to firstly lodge a case before the labour commissioner and thus their application should be dismissed.

The disgruntled workers are demanding a salary increment of N$600, a housing allowance of N$450, a transport allowance of N$500, and permanent employment for workers who have worked in the stores for over a year temporarily. Documents filed before the court show that most of the employees are employed on a temporary basis for extended periods ranging up to more than 10 years.
These temporary workers are paid between N$300 and N$400 per week.  This amounts to a monthly salary of between N$1 200 and N$1 600 on a five-day work basis.  The permanent workers are paid between N$2 000 and N$3 000 per month. The employees do not receive transport allowance nor is transport provided by the company.

They also don’t receive any benefits such as housing allowance or medical aid. Court documents further indicate, while many companies and workers suffered tremendous losses and hardship Shoprite’s profits skyrocketed.  Results released by the group for the 52 weeks to 28 June 2020 show a 6.4% increase in overall sales to a record of N$156.9 billion.

Shoprite’s trading profit increased by 13% to more than N$18 billion. At the end of June 2020, Shoprite increased its net cash position from N$3.6 billion, at the end of the previous year, to N$10 billion.
Judge Ueitele is expected to give a ruling on the application on Friday afternoon.
-mamakali@nepc.com.na