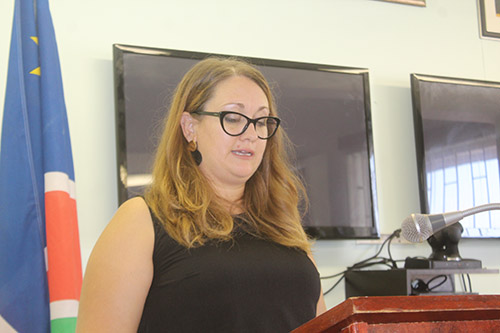 The suit filed by expelled Independent Patriots for Change party member and former chairperson of the Erongo Regional Council, Ciske Smith-Howard, is ongoing in the High Court.

Despite Smith-Howard having been expelled by the party in May, her suit, which she filed in December 2021, remains on the roll. It is scheduled to return to court on 8 August for a pre-trial conference hearing.

Smith-Howard wants the court to declare the party’s decision to suspend her, taken on 20 October 2021, null and void of any and all legal consequences, and set aside.“Prior to the aforesaid suspension, the plaintiff (Smith-Howard) was not afforded an opportunity to make representations to the first defendant (IPC) on the allegation giving rise to the suspension,” she says in her affidavit.

Smith-Howard further claims she was not informed of allegations giving rise to any complaint against her by any independent investigator from the party, and her suspension was only  verbally communicated to her.

She was, however, lucky in obtaining an interdict against the party’s secretary general Christine !Auchamus from instituting any disciplinary action against her, pending the finalisation of this case.

The order was granted a day after the party indicated that it would not be proceeding with the disciplinary hearing.

Smith-Howard has been accused of fraudulent activities involving documents she submitted to verify her proof of residence, as required by the Regional Councils Act 22 of 1992, and was restrained in October 2021 by the IPC from acting in any manner or on any forum on behalf of the IPC, or any representative of the party.

She was reinstated earlier this year, but resigned after a brief stint when fellow IPC councillor Donatus Tegako tabled a vote of no-confidence motion against her.

In its plea, the party denies suspending Smith-Howard verbally, and says she should have exhausted internal procedures before instituting the application as the party’s constitution dictates it.

“This honourable court must find that the plaintiff’s failure to have recourse to available internal remedies and not litigation results in a dismissal of the action with costs,” says the party.

Smith-Howard could not be reached for comment as her phone went unanswered.