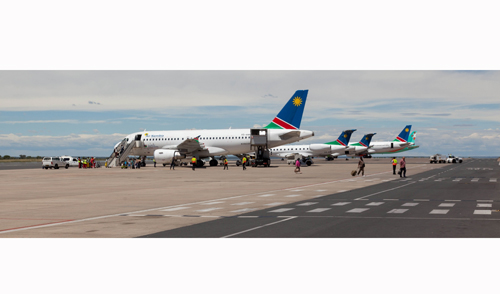 KEETMANSHOOP – Oranjemund constituency councillor Lazarus Nangolo says government and various stakeholders should re-strategise and work around modalities to allow Air Namibia to continue operating instead of closing it down through liquidation.
“As regional councillor and former trade unionist, I am not in agreement with this liquidation and are calling on government to re-look into this matter accordingly,’’ he suggested.

Nangolo further expressed that Air Namibia, as a former employer and serving Oranjemund with domestic flights, played a vital role in both providing employment and promoting tourism opportunities for Oranjemund constituency before its closure.
“We just started to transform the previously known ‘diamond town’ into economic/agricultural hub when one of our main stakeholders (Air Namibia) ceased its operations, thus negatively affecting our plans for a prosperous future of Oranjemund,’’ he said.

The councillor added many residents in town will now be left unemployed, whilst income generated from tourism might now decrease due to the absence of domestic flights.

“Tourism puts the town and Namibia at large on the international scene – but with the implications of the liquidation, this might now be affected adversely,’’ he said.
The politician also raised fears that if the country’s airline operations landed in the wrong hands in the immediate future, it might be a challenge for government to manage it.

“Private owners may determine air ticket fares at their liberty, which might make flying for ordinary persons unaffordable,’’ he added.
“The previous Air Namibia executive management should now be held accountable for the predicament of the airline as they were entrusted with national resources to run it,’’ Nangolo argued.
The regional councillor expressed sincere hope that the liquidation process will be withdrawn for the goodwill of those affected employees and stakeholders.

Meanwhile, //Kharas regional governor Aletha Frederick, when approached for comment, concurred with Nangolo that the tourism sector in the region will be adversely affected whilst the unemployment rate will also increase as a result of the airline’s liquidation.
“Was there really no other option than liquidating Air Namibia and how broad has consultations been before such a drastic decision has been taken, affecting so many people,’’ she then raised the concern.

The regional political head went on that being given such a short notice of termination of employment must have caught the affected employees unaware without being first given the opportunity to look for other means of employment or plan ahead.
The regional governor furthermore agreed the operational expenditure of the national airline was a financial burden for government, pumping lots of public funds into it but remain positive that the decision might be reversed in the near future.
Air Namibia used to operate domestic flights for Eros airport to Walvis Bay, Ondangwa, Lüderitz and Oranjemund prior to its liquidation.
- sklukowski@nepc.com.na