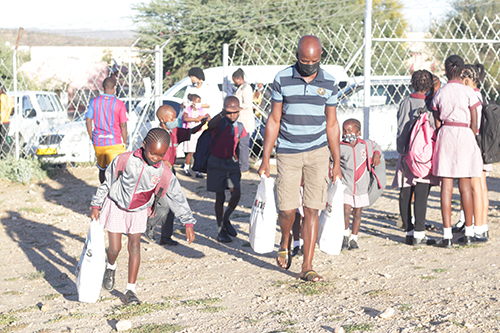 The burning question on many people’s lips remains to what extent is free education free? with the Students’ Union of Namibia saying the Namibian education system is fast becoming a privilege and not a right.

SUN secretary for policy analysis and vulnerable Brian Ngutjinazo noted Namibian children have been crying for free education at all possible levels.

“Education is the most expensive public good at the disposal of the poor Namibian population. When will education be free as advocated for by the late Dr Abraham Iyambo and many other Namibians who worry about the future of Namibia?” he reacted.

Education is regarded as a human right in most countries of the world, which enables human beings to be proficient in basic and advanced numeracy and literacy.

The government decided to provide free education to preprimary and primary learners because it is a requirement of the constitution.

In terms of Article 20 of the Namibian Constitution, “primary education shall be compulsory and the State shall provide reasonable facilities to render effective this right for every resident within Namibia, by establishing and maintaining State schools at which primary education will be provided free of charge.”

Like other countries, Namibia has committed itself to making primary and secondary education a fundamental human right for all its residents.

Being a human right also implies that primary education was to be provided for free among public schools in Namibia, which then brought the concept of free education to the fore.

Still, with free education, there have been media reports at the beginning of the 2022 academic year that there are schools that allegedly turned away children due to outstanding fees from the previous year.

Equally, parents have expressed concern over the yearly stationery lists including cleaning materials they received from different schools to buy for their children.

According to Ngutjinazo, the students and learners were facing challenges of registration fees, which are high, and learners in most public schools were forcing parents to purchase books and other stationery.

Equally, he said it has become a concern to the number of students originating from marginalised backgrounds whose tuition fees are not settled at universities and many other institutions of higher learning.

“The criteria that are in place to further discriminate students from marginalised backgrounds is uncalled for and need to be investigated. The offices dealing with disability affairs are doing a phenomenal job, and they should continue with the superb job they are doing by empowering persons with disability,” Ngutjinazo stressed.