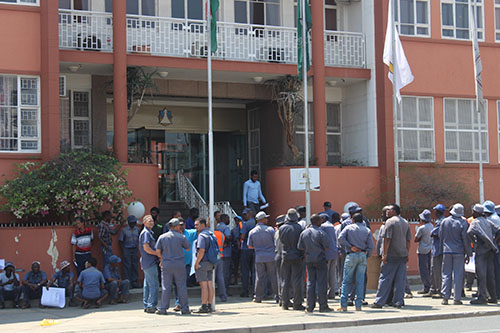 Workers at TransNamib are up in arms over pension money deducted from them monthly, which the company failed to pay over to the pension administrator since May 2021.

A case (CR183/01/2022) of fraud has since been opened with NamPol’s commercial crimes investigation department. The workers claim that TransNamib deducted their pension money, but it never reached the intended recipient or the account of a managing agent of the funds.

Specialist Administrative Services is in charge of the TransNamib workers’ pension fund.

According to the police charge-sheet, the incident happened between May 2021 and December 2021 at TransNamib Holdings Limited, where a suspect has been deducting pension fund contributions from the members’ salary without paying it to the relevant pension fund administrator.

The amount of ‘missing’ money is believed to be over N$2.2 million. No money has yet been recovered.  “Our pension fund is privately-managed. The company has been deducting money from us, but they never paid it over to the administrator since May 2021 until now. There is no investment growth on our pension. The workers who retired, were retrenched or die are facing a crisis. We are in limbo and don’t know what to do. There are no payouts in terms of our pension,” complained an employee.

Another one charged that as workers, they wrote to management on the issue, but have not received a satisfactory response.

Workers allege that they, through the Namibia Transport and Allied Workers Union (Natau), wrote letters to TransNamib management, who never responded on the issue.

“The pension fund administrators also wrote a letter to the board of directors and to Namfisa. Namfisa advised the pension fund to go and open a criminal case with the Namibian police. Management failed to communicate to everyone on the non-contribution of our pensions to the fund. Natau registered a case with the ministry of labour, but the case is yet to be heard. The workers are waiting for whatever outcome,” an employee said.

Workers threatened that if there is no amicable solution, they will resort to industrial action.

TransNamib spokesperson Abigail Raubenheimer said management has been quite transparent in terms of the historical financial challenges and the cash flow constraints experienced by the company.

According to her, this situation is not new, and was exacerbated by the impact of Covid-19 on the company.

“Our last two financial periods have been difficult, which most, if not all companies can attest to, given the financial impact of Covid-19 on businesses. Unfortunately, the reality is that the income that we generated was not enough to cover the expenses of the company. It would then be prudent to note that our difficulties with regards to the payment of pension fund contributions only started in 2021,” she noted.

Raubenheimer added that it is against this background that the company has continually given employees context into the financial constraints faced by TransNamib, and the impact thereof.

In fact, she highlighted that during November/December 2021, chief executive officer (CEO) Johny Smith undertook countrywide staff meetings to give employees an update on the company and the financial difficulties faced by TransNamib, and specifically addressed the matter of the pension fund contributions.

“We have also, during our engagement with the union, been quite clear about the company’s financial challenges. TransNamib has already put plans in place to rectify this situation, with one month’s contribution being paid over in December 2021 already. Within the next 30 days, we plan to pay over three months’ contributions, and discuss a payment plan with the pension fund administrator for the balance,” she indicated.

Raubenheimer is hopeful that TransNamib would be as current as possible with the pension fund contributions within the new financial year, beginning in April.

Due to internal processes needing to be finalised first, the company was unable to give a formal response to the union, but those processes have now been finalised.

“We can formally give the union feedback on how we will clear the backlog in terms of the pension fund contributions,” she promised.

She furthermore made it clear that TransNamib is not conducting a retrenchment exercise.  At the moment, they are in the process of rightsizing the company through a voluntary exit process, which is expected to be concluded by April 2022.

“As a responsible employer, we have our challenges, but we have put measures in place to ensure that our employees are protected.  Employees’ entitlement benefits will not be impacted at all, and all employees will receive what is due to them, including the interest due,” she assured.

Further, it is because of the financial constraints that the company is continually working to procure additional capacity in terms of its rolling stock.

Therefore, she said the four locomotives they have recently leased which arrived last year would make a difference in their revenue and positively impact TransNamib’s cash flow available.