Home / Tributes pour in for Antindi

Tributes pour in for Antindi 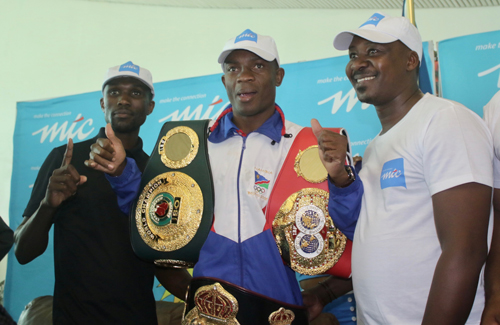 The Namibian boxing fraternity has suffered a massive blow following the death of renowned trainer Joseph Antindi, who died last week in the Oshana region after an illness.

He was a trainer with the MTC Nestor Sunshine Tobias Boxing and Fitness Academy. Antindi was a former boxer who also competed in the welterweight division before retiring from active boxing to become a trainer in 2003.
Leading the tributes, Nestor Tobias said Antindi’s departure was a big loss to the academy and the entire boxing community. He added Antindi was a well-known boxing coach and trainer who played a vital role in shaping boxing champions like Paulus Moses, Paulus Ambunda, Julius Indongo and Jeremiah Nakathila.

“He will forever be remembered for the role he played in taking Namibian boxing to the world. MTC Nestor Sunshine Promotions would like to express its sincere condolences to his family and we ask boxing fans to keep his family in their prayers during this difficult time,” Tobias said. Nakathila who was under the guidance of Antindi said he was in disbelief when news broke about his death.
“It is a big loss losing guys like him, we had plans to win something big together because my achievements would have been his achievements too. I lost a great mentor, he is one of the best trainers I have ever worked with,” said Nakathila. “He has worked with all the great boxers in the country, so his passing will obviously come with some effects as his skills are different.”

Chairperson of the Namibia Professional Boxing and Wrestling Control Board (NPBWCB) Dr Bernard Haufiku in a statement described the trainer as a committed person to what he loved.
“Antindi is a veteran of professional boxing in Namibia, a pioneer of this revered sporting code in Namibia in his own right,” said Haufiku.
“He was a well-known boxing trainer and coach of note across all weight divisions and for a very long time. A dedicated member of the champions in makings from his boxing academy.

He has been for more than 20 years a part of professional boxing’s success story in Namibia - a leading member of the team that flies the Namibian flag high and puts our country on the boxing world map, thanks to his unwavering and uncompromising commitments.
His absence from the ringside shall therefore be missed by all boxing fans, boxers and officials alike and indeed by everyone who cares about boxing as a sporting code in Namibia.”
– mkambukwe@nepc.com.na