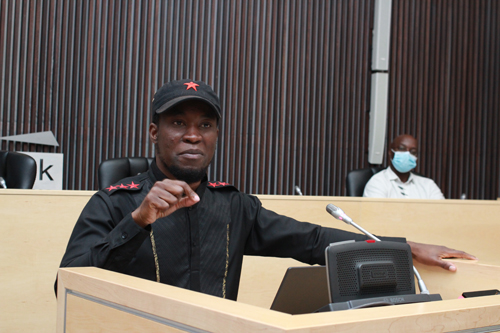 The City of Windhoek has announced it will re-join the Association of Local Authorities in Namibia (ALAN) after its new council approved the renewal of its membership this week during an ordinary council meeting.

The local authority had terminated its membership with ALAN in 2019 due to concerns over a lack of financial reporting by the association and recommended the resignation from the umbrella body until such a time it has provided the necessary documentation.
Windhoek mayor Job Amupanda told journalist ALAN has submitted the necessary financial reports to the city council last year, paving way for the local authority to re-join the association.

“The City of Windhoek, as a capital city and largest local authority in Namibia, plays a key role – not only in nation-building but also in the development of local government in the context of decentralisation. It also has the key role to play in the transformation of the association. Hence, its continued membership to the umbrella body is crucial, citing the council,” he said.

ALAN is the umbrella body that plays an advocacy role on behalf of local authorities to, among others, promote and assist its membership address socioeconomic problems comprehensively and sustainably to stimulate growth and financial stability.
It also aims to safeguard and enhance the image, interests, rights and privileges of local authorities.

Since its inception, according to the council, the city has been a paid-up member of the association and has three officials on the ALAN board.
The council further outlined that the city has been providing accommodation for free of charge to the association in Khomasdal.
Meanwhile, Amupanda also announced the council approved the request to register the current Mayoral Relief Fund as a fully-fledged Windhoek Residents Mayoral Trust.

The City of Windhoek Mayoral Relief Fund was established in 2017 to support vulnerable community members and individuals who are in extreme need. The fund aims to address the challenges affecting the residents’ social wellbeing and livelihood, amongst others.
“By this intervention, the City of Windhoek expressed readiness to continue its active contribution towards social progression by improving all residents’ quality of life as articulated in its mission,” he cited.

The mayor further explained the main aim to register a trust is for the Mayoral Relief Fund to operate as a legal entity, based on charitable fund’s principles, as well as a tool the fund could use to gain more recognition and increase income by attaining assets.
“The City of Windhoek Council will be the founder of the trust, and the trustees are appointed, which will include a council representative and other members drawn from various sectors of the Windhoek community,” he said.
- ljason@nepc.com.na