Home / Your dreams are valid

Your dreams are valid 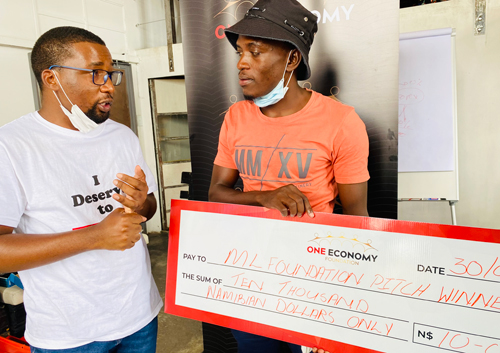 Chemist Shipandeni Johannes Shiwombolo is urging young Namibians to actively be in charge and robustly pursue their dreams, as they are valid and achievable, all that’s required is starting small.
Shiwombolo won N$10 000, an amount pledged by the One Economy Foundation at the pitching competition for the best business idea at the Entrepreneurship Masterclass hosted by the ML Foundation for his business, SG Cleaning Chemicals, which manufactures cleaning detergents such as dishwashing liquid soap.

Originally from Ohakweenyanga in the northern part of the country, the 26-year-old said he has been dreaming of coming up with a cleaning detergent manufacturer in Namibia.

He said: “I have been having the idea of venturing into this for about three years now and I could have started with it but I had obstacles. Just to come up with the dishwashing liquid soap chemicals you have to spend probably around N$6 000,” he recalled.
Shiwombolo said it sometimes saddens him to realise how Namibia is heavily dependent on other countries for basic supplies, so the dream is to industrialise the country - to have manufacturing companies, which belong to the Namibian people.

Last year, he worked at a mine for three months then got retrenched. “I then decided to not sit home but start working on my dream with the little I have. My business is about producing/manufacturing cleaning chemicals. At the moment, I am only producing dishwashing liquid soap due to financial problems,” he detailed.

He added: “With the money that I won, I already planned everything. Am going to add a second product, one or two depending on the cost. I am also planning on improving the
quality of my dishwashing liquid soap because I am always doing research just to give my customers the best products. I want to be the sunlight in Namibia,” he shared.

The overzealous entrepreneur told Youth Corner at first he was confused because, after graduation from the Namibian University of Science and Technology, he was home and had no job.

“It was too much for me because I had to think of something that will help me to sustain myself, I started doing research then the idea came up. Since I have learned how to handle and control chemicals and I am aware of the safety measures when dealing with them, it was not that hard. With that idea in my mind, I was faced with another hurdle which was the start-up capital,” he narrated.

He added: “My idea is so broad and it is mostly on manufacturing goods in Namibia. Although we are getting chemicals from outside, as Namibians we should have such companies owned by Namibians that belong to Namibia. If I manage to get more sponsors, my dream is to produce all the cleaning related chemicals, Pine Gel, floor lavender, toilet cleaner, hand sanitisers, hand soap, bleach, handy andy, liquid bathing soap, laundry soap, carwash soap just to mention a few. This will also be a great job opportunity for others who are in the streets.”
He stated that it’s all about starting small. “Start with what you have and don’t listen to the negative energy. Young Namibians should prioritise education. Things can be tough I know but don’t give up on school. It’s better to be home with a dream knowing that one day you
will receive a call to go work instead of sitting home with nothing.”

Following a successful Masterclass, First Lady Monica Geingos committed to purchasing her household cleaning materials from SG Cleaning in an endeavour to support local manufacturers. She encourages all Namibians to support local goods and services when possible.
The Entrepreneurship Masterclass is an initiative by artist and economic researcher Maria-Lisa Immanuel aimed at empowering the youth through knowledge and experience sharing in the entrepreneurial sector.

The CEO of the One Economy Foundation Sem Mandela Uutoni said The One Economy and ML Foundation will provide business growth support and mentoring to SG Cleaning Chemicals for three months.

“We prioritise supporting grassroots and small and medium-sized businesses as they are key to job creation, stimulating local economic development, and improving livelihoods.

Therefore, we initiate, strengthen and support initiatives which improve the resilience, capacity, and capital of entrepreneurs,” elaborated Uutoni.
- psiririka@nepc.com.na