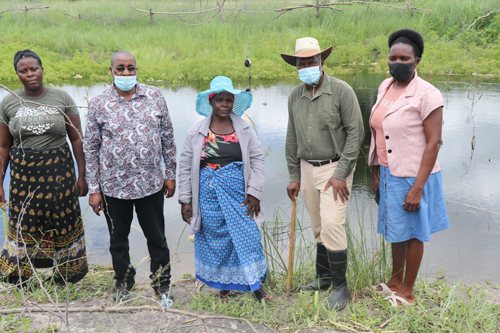 KATIMA MULILO – With most parts of the country receiving above-average rainfall, some areas of Zambezi region have not been spared with early flooding, which has been experienced in traditionally dry areas.

As a result, Zambezi governor Lawrence Sampofu visited Sangwali in the Judea Lyaboloma constituency to meet with the affected farmers and familiarise himself with fields that have been submerged by flash floods in the area.

According to Sampofu, some of the community members who planted vegetables and maize in August managed to harvest.
“They planted again – but now, because of heavy rainfall, everything is underwater, including the watermelons. This is their survival and will greatly affect them. Their survival will now depend on our support, and we are looking into giving seeds so that they can plant on higher grounds, as we are still in January and they can still plant,” he said.

“What we have seen now is that there are already crocodiles and hippos in the water here, so it has become very dangerous for people to stay here.”
Some community members narrated how the flash floods have affected them, saying they were caught off-guard and are now left to rue the irreplaceable loss.

“The maize seeds that I had planted were bought and I used them all up. What I could have harvested – had it not been for this flood – would have been enough, because the field where I had planted is fertile,” said a distraught Nalufu Limbo.
She further explained she had already harvested twice and managed to sell some.
“I managed to make around N$2 000 from the first harvests; this was supposed to be my third harvest – unfortunately, it has been destroyed,” said Limbo.

Another communal farmer Grace Sampati shared similar sentiments.
“I feel so disappointed; this was our livelihood – and I had planted maize, squash, as well as pumpkin. What I managed to save was very little, as most of them were submerged and started rotting. We have always planted our vegetables here and it has never flooded until now after heavy rainfall,” elaborated Sampati.