Home / Govt calls for speedy burials… as Covid deaths near 1000

Govt calls for speedy burials… as Covid deaths near 1000 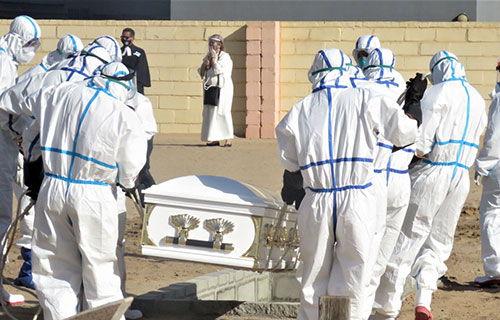 Health minister Dr Kalumbi Shangula has called for speedy burials as Covid-19 deaths near the 1 000 mark and surpasses the figures of the disease estimates projection model that indicated that Namibia would have recorded 834 deaths during 2020 and 2021.

In the last two weeks, the country reported 5 761 new confirmed cases and 147 deaths.

Shangula, addressing lawmakers in parliament on Tuesday, advised families to ensure speedy burial of their loved ones to decongest the mortuaries, adding that the high number of death cases reported are placing pressure on available space at State mortuaries.

“Provisions of the law will be enforced with respect to families who fail to collect bodies of their loved ones from the State mortuaries within the time as provided in the relevant law. Some of the bodies have been laying in mortuaries for a period of five years even,” Shangula told lawmakers.

Shangula said the numbers of new infections; hospitalisations and deaths have unfortunately increased exponentially in recent weeks. On Tuesday, the country reported 722 new cases and 16 deaths.

Shangula said the recovery and death rates for the last epidemiological week is 89.4% and 1.6% respectively.

By any measure, the health minister said, these numbers are indeed alarming.

“Increased hospitalisations are placing immense pressure on the healthcare system, with respect to available personnel, facilities, equipment, supplies and commodities,” he said.

For instance, Shangula said there is an observed high demand for oxygen and personal protective equipment.  “Consistent and high-quality supply of oxygen is critical to saving lives,” he added.

Looking at available epidemiological data, Shangula said it is evident that Namibia has entered a virulent and deadly third wave of the Covid-19 pandemic. “This calls for all our people to do their part to suppress the spread of the virus, to protect themselves and their families and indeed our communities,” he said.

“Of concern is the fact that the presence of the variant of concern originally identified in South Africa was confirmed in a significant number of Covid-19 positive cases in Namibia.”

The doctor added that genome sequencing is being conducted at the University of Namibia (Unam) laboratory to identify
the Covid-19 variants circulating in the country.