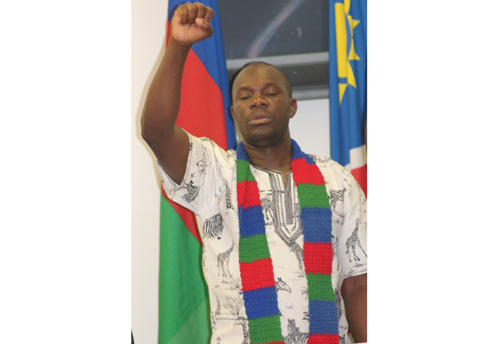 Nekongo who on Monday called on the government to reverse its decision to liquidate the national airline said the CCT chaired by finance minister Iipumbu Shiimi misinformed Cabinet “as they did not consider the damage and impact the case may bring to the Swapo party”.
“We will not support any liquidation of any state-owned enterprise or privatisation of any state entity and we are requesting the Cabinet to reverse the decision taken as advised by the CCT,” Nekongo said in a media statement after a meeting with Prime Minister Saara Kuugongelwa-Amadhila on Monday.

He said the Namibian economic revival cannot be attained by closing down the national airline. “We disagree that government funding Air Namibia in its current state will result in government employees not getting their salaries, increment or capital projects being put on hold,” he stressed.

He said the ruling party youth believes that the national airline should remain in operation with serious restructuring, reform should be done as soon as possible. Meanwhile, Shiimi has over the past few weeks emphasised Air Namibia’s current debt was unsustainable and would jeopardise the national economic recovery plan that the government is currently seized with.

During a recent press conference, Shiimi stated the net economic costs of Air Namibia’s operations far outstrip the net gains and are thus unsustainable. It is estimated that so far, the government has spent more than N$8 billion on Air Namibia.
“At this stage, the country’s economy can no longer afford to perpetually provide financial support to Air Namibia at the expense of supporting economic growth and critical social services.

It is, therefore, with that consideration that the government decided to file for the voluntary liquidation of Air Namibia,” he said, adding that the government considered all other options, which included engagement with other airlines for potential investment or partnership.  Equally, he added, the government has also assessed various business plans to turn around the company.
-ktjitemisa@nepc.com.na