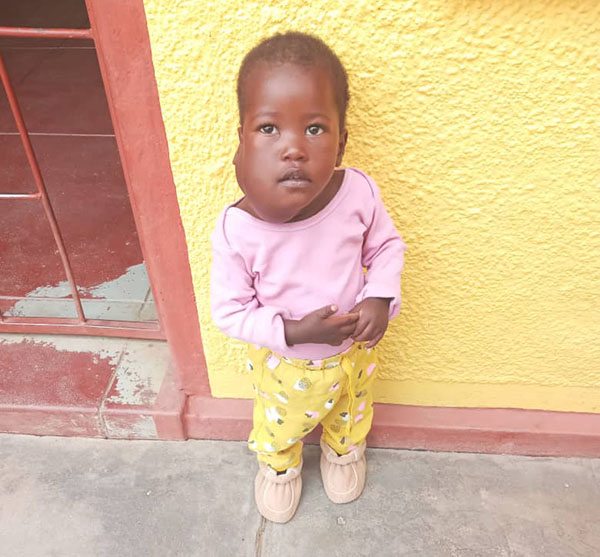 OKAHANDJA - An unemployed mother living in Okahandja’s Five Rand informal settlement is seeking financial help for the surgery of her child who was born with a rare and severe condition, cystic hygroma.

A life-threatening cystic hygroma, also known as lymphangioma, is a lymphatic lesion that usually affects the head and neck and is caused by the obstruction of a lymphatic drainage pathway.  The baby, Lavinia Kalola was born on 8 April 2021 at Okahandja state hospital with a complicated tumour on her neck which grew bigger day by day as she aged.

She is now one year and seven months old. Selma Ipinge, the mother (25), has been struggling to raise funds for surgery and is appealing to good Samaritans to come to her baby’s rescue. She said the condition has retarded her baby’s growth; as she often does not want to feed. The sad part is the tumour or cystic blocks her airways.

“She has difficulty in breathing. We have to constantly tap her back to resuscitate her. The doctors in Windhoek at Central hospital told me they can’t operate on her because it is risky. I asked what other alternatives does she have. The doctors said maybe I should try private doctors. I am unemployed and I have no money for a specialist and the operation. I am distressed because my baby is sick. I need urgent assistance to have my baby operated on so she lives a normal life,” the mother pleaded.

Ipinge says she often faces stigma in society when she walks around with her baby.  According to her, people start asking what happened to the child while others will say, “look at this one with a big cheek”.  “I don’t sleep well because I don’t know what to expect when she struggles to breathe. She doesn’t eat well and she has a continuous cough. As the child is growing, the tumour is also growing,” she said.

No medicine can cure cystic hygroma. Treatment options include surgery and sclerotherapy.

It involves injecting a solution directly into the vein. The sclerotherapy solution causes the vein to scar, forcing blood to reroute through healthier veins.

The desperate family says the baby needs to be treated as soon as possible to ensure that she does not suffer any further complications as she grows older.

The ultrasound report carried out by the Windhoek Central hospital when the baby was 12 days old shows that the infant was born with multiple cystic lesions.

Doctors found no extension to the posterior neck region. The child’s thyroid glands appeared normal and the vessels are patent and of normal calibre.

“A review by a paediatrician to rule out possible associated anomalies and pediatric surgery team for an appropriate further evaluation of either CT or MRI study of the neck given the radiation exposure to a minor is advised,” the medical report recommended.

The baby had her latest ultrasound carried out again at Windhoek Central hospital on 22 August 2022.

The findings show the dermis layer of the neck tissue is thickened and echogenic more pronounced on the right than the left.

These scans also show multiple and bilateral lymph nodes in the neck, more and larger on the right than the left side. The report states these are mostly round in shape with irregular margins, hypoechoic echotexture with loss of the echogenic hilum, and some display increased perfusion.

Doctors also detected mild prominence of the jugular vessels on the right of her neck.

The doctors noted a large, thick-walled cystic lesion as described above, which is suggestive of a cystic hygroma.

According to Ipinge, the baby’s father is absent and not supportive especially when he saw her condition.

Speaking to her unemployed mother, Albertina Matheus said they both struggle with the upkeep of the baby.

“I sometimes sleep with her but she struggles to breathe. Sometimes, you feed her but she doesn’t want to eat. She lost weight. We are appealing to good Samaritans to come to the aid of my grandchild to have an operation. I want her to grow up living a normal life,” she implored.

An aunt to Ipinge, Inna Michael, who lives in Okahandja, often checks up on the child.

“Sometimes when I come or call them, there is no food at home. I help buy food and nappies for the baby. It’s really tough for them. The child is suffering. We tried everything in our power to get her treated but there is no money to go to a specialist for an operation.

“Hence, we are pleading with good Samaritans to help the family get the child operated on. We can be reached on 0812924770 for any assistance.”