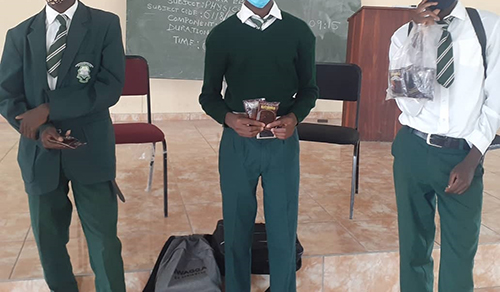 RUNDU – Kavango East police chief Johanna Ngondo has urged parents to pay close attention to their schoolgoing children’s behaviour as some are using alcohol and drugs on school grounds. She said this was a serious concern, which often leads to learners disrespecting teachers and bullying others.

“If you see a change in your child’s behaviour, one should look into it, because kids are being influenced by others into using alcohol at school. This also affects their performance at school,’’ she added.

Law-enforcement officers were last Thursday called to the Romanus Kamunoko Secondary School in Rundu to inspect the bags of learners as teachers suspected they were using alcohol on the school grounds after empty sachets were regularly discovered in the learners’ toilets.

“Learners are sometimes using alcohol because of peer pressure; because of cliques at school doing it. So, some learners use it to belong to that group. I’m not saying that I’m a perfect parent, but as parents let’s sometimes check in our kids’ bags when they go to school. If a child comes home with a cellphone that you haven’t bought for them, question them,’’ she stressed.

During that search, the officers discovered various illicit Best and Kisomba-branded liquor. These sachets of illegal whiskey are of Angolan origin, which made their way into the region during the lockdown periods when alcohol was banned, and this was the only source of alcohol illegally brought in over the river from the Angolan
side.

This whiskey has become common in the streets of Rundu, as well as in all corners of the two Kavango regions.

“The school called the police, who found more whiskey in the possession of learners. Sachets of whiskey were confiscated by police. We always visit schools to do awareness about the dangers of alcohol and drug abuse among learners, and how it affects our society,’’ Ngondo noted.